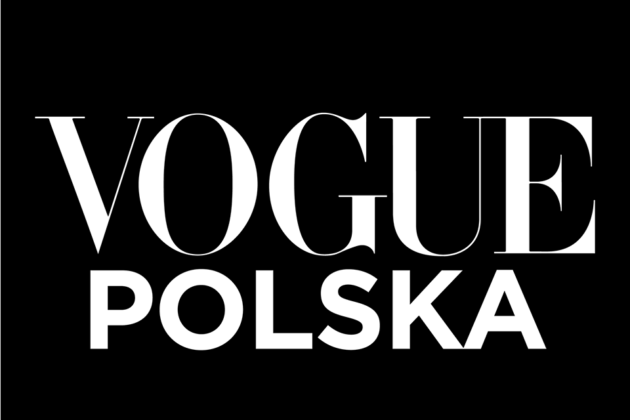 It’s Not Just A Magazine. This is the One and Indisputable Voice of Fashion. Analysis of the Vouge Poland Magazine

According to media sources, Vouge Poland isn’t the best-selling fashion magazine on our local Polish market. VP’s on the 5th place on ‘Top 10 Women’s Magazines in Poland. Cosmopolitan, Elle and glamour are leading on this list. Nevertheless, the latest issue is the reason why people get so excited. It’s because Vouge has a rich history and recognizable title, but also because of symbolic ‘one’ which is a first page of the magazine the cover.

Numbers and Symbols of the First Issue.

The Vouge Poland, first launched on Valentine’s Day in 2018, was the twenty-third local edition of Vogue Magazine. The first issue of VP had a print circulation on 160.000 and w priced at 16.99 PLN. When we want to compere the price and the print circulation of VP to other women’s magazine such as Elle, Glamour or Cosmopolitan, the VP looks slightly too expensive. When the Conde Nast was ready to announce that polish edition will be the 23rd baby of CN publisher, polish readers have been impatiently waiting to see the very first cover page of the Vouge Poland issue. When the mystery of the first cover has been solved, people started to ‘ redecorating’ the cover which delivered so many reasons to laugh about. Some of them were gimmicky and hilarious but some were completely vacuous. Unarguably “the cover-makeover affair” was the most remembered RTM (real time markeyiong) action in 2018. 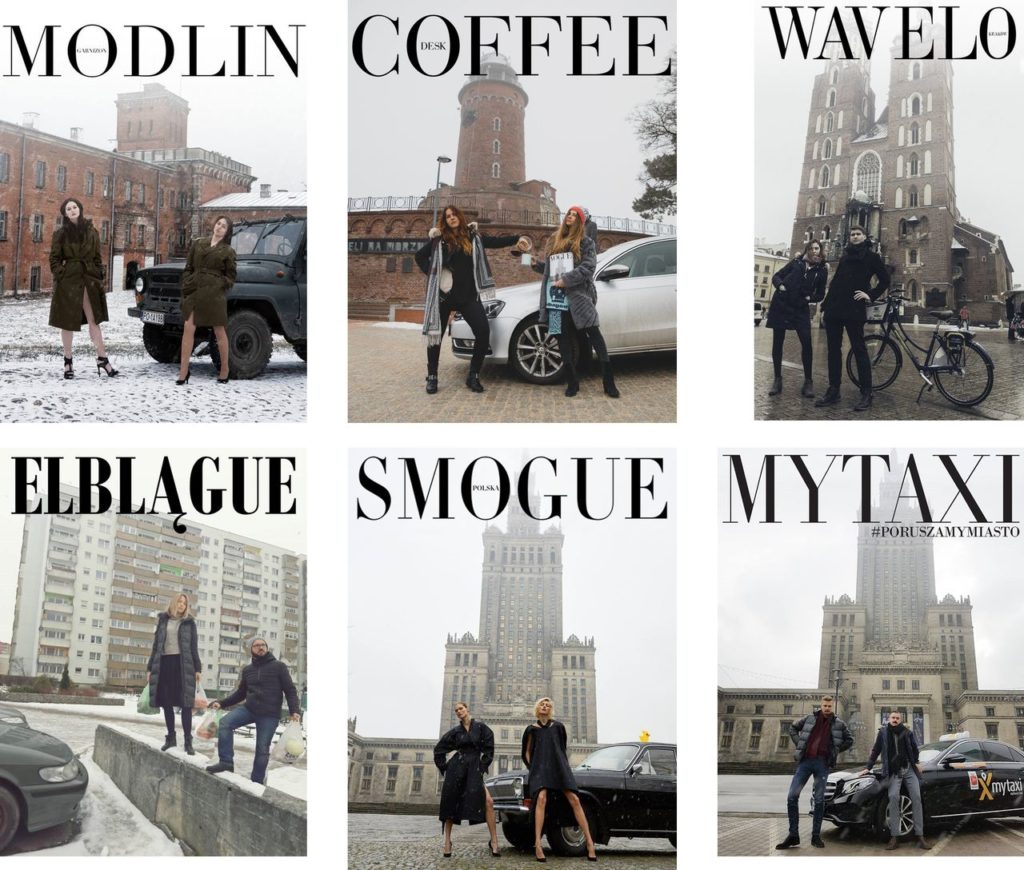 If Covers Could Talk

A first cover of Vouge Poland showed us some sort of a way the magazine could use to communication to the readers. But, is it true? A first cover seems like collage of everything what we can describe as a “Polish”; Polish attractive women, a positive sentiment to past automotive industry, on the background -the legacy of Polish People’s Republic – Palace of Culture and Science and the vibe of the ‘ eternally-cold’ country. Fortunately (or not), the first cover of VP was and still is, ‘the only one’ and not coincides with the next ones. The covers of Polish Vouge, after the first one is no longer referred to ‘specific-Polish-soul’. But, is there any common ground to be found? It seems not. Each new cover looks different from the others and shows an individual character by giving the readers a main subject of an issue, but there is not any evident ‘key’ the readers could use to describe the cover pages. 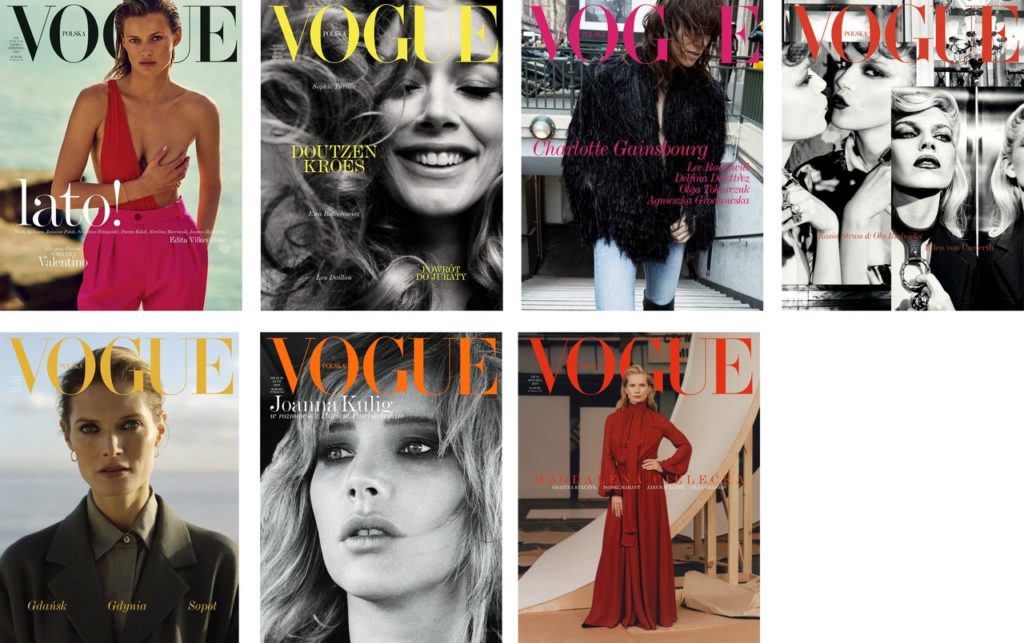 The ads in Vouge Poland are surprising for many reasons. Firstly, the number of ads is quite overwhelming. 133 ads on 362 pages of the first issue. Secondly, selection of the advertisers is highly surprising as well. For some readers, selection of the ads is ‘slightly mismatched’. On the VP’s pages, people can find these ‘inappropriate’ ads of many Polish cosmetic brands such as Bielenda, Soraya or Ziaja. Certainly, they’re good for a skin but not as being the part of such a luxury magazine, especially when they appear next to the prestigious brands such as Gucci, Carolina Herrera or Rolex. That kind of ‘circle’ is not good for Polish brands nor the glam ones and especially, for the magazine for what it is. Is a cost of being a part of advertisers in VP also surprising? Well, yes and no. According to media sources, the price of a full colour-page ad in first issue, was 149 800 PLN to 280 000 PLN.

Symbol of a Fashion or Symbol of Western?

What is Vouge on Polish media market? it is a symbol of a fashion or symbol of Western world? There are many points of views. Vogue magazine is a symbol of a fashion because is characterized by its content, which is mostly – fashion. Although, in Polish edition the ‘ glossy-things’ aren’t the most important part of the magazine, it seems to socio-political subject is the one. Describing a Vouge as a symbol of Western is also on point because readers see this magazine in this way. The very first issue beside a cover, also on its spread, was a stage of confrontation ‘Poland vs. Western’ (in categories such as a fashion, political area, or mindset). But is it true that, Vouge Poland standing far away from Vouge Deutsch, Nederland, British or French edition? It seems not. At first glance everything looks comparable. There are no significant differences between technical, graphical or creative style of Polish issue and the others.

In the VP’s context, autumn/winter 2019 is the most important time of the year. Designer’s, photographers, fashion-lovers and, people from the marketing industry are looking forward to seeing what Vouge Poland edition going to deliver. There are at least two reasons to ask ‘why?’. First of them (not really intriguing), is the new Vouge’s app. The second reason and the ‘special one’ why people can’t wait is, the media venture Visteria (Vouge Poland’s publisher) will launch the brand-new and unique issue, for menswear lovers Vouge Man, which will be the magazine of male fashion.

If you liked this article and would like to leave your opinion, please write to the author: 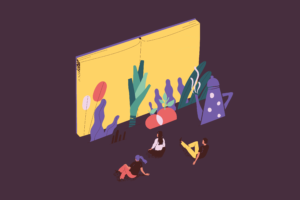